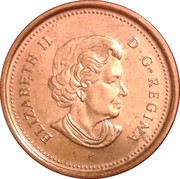 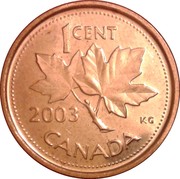 A maple twig with the denomination above, the date to the left, and the country name below

KM#490a issues are magnetic due to plated Steel. They feature either a "P", "W" or the RCM logo. 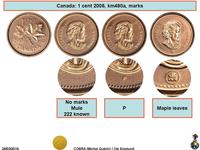 Since being announced in March 2012 the Canadian mint would cease production of the one cent coin and would gradually withdraw the coin the following year. The last coin was minted on May 4th 2012 and the Canadian mint ceased distribution of them as of February 4  2013 but it remains legal tender. Since then all Cash transactions are now rounded to the nearest 5¢.