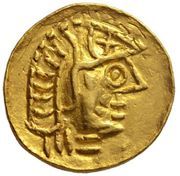 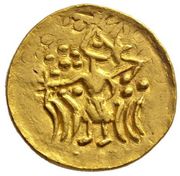 Stylized head of Athena with Attic helmet concentric ball eye to the right.

Stylized Nike with stylis and wreath to the left, head turned to the right, several balls in the field. The edge was raised by opening after embossing.

Imitating Alexander III. The assignation of this remarkable cointype has challenged scholars for many years now. Whereas Paulsen sees the origin of this type in the area of Lake Constance, Kapanadzes puts forth good arguments to peg down the provenence in the eastern region, notably in Colchis (western Georgia) (cp. Kapanadze, Über die ältesten Goldmünzen Grusiens, VDI 1949, S. 156-169). Although some scholars doubt the reports of the occurence of this cointype in the western region, it nevertheless could be possible that the disturbances of the 1. Century BC and consequent tribal movements, as well as trading aspects could be responsible for the occurence of such Goldstaters in the middle-european Celtic world. Flesche supports Vani in West Georgia as minting site. These imitations reveal another interesting information: The prototyps for our "Goldstater" were most probably circulating for approximately 200 years. (Source: Numismatics Lanz Munich Auction 160 Catalog)