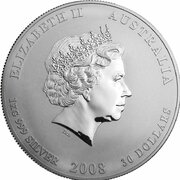 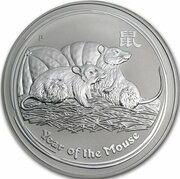 Lettering:
P
Year of the Mouse

This was the first Fine Silver (.999) coin in the Second Lunar Series Issued by the Perth Mint.

It overlapped the First Series as coins from both Lunar Series 1 & 2 were issued in 2008.

Bullion value: 829.30 USD Search tips
This value is given for information purpose only. It is based on a price of silver at 830 USD/kg. Numista does not buy or sell coins or metal.