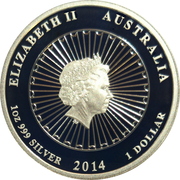 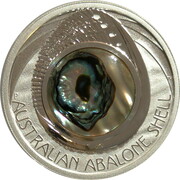 4th portrait of Queen Elizabeth II facing right wearing the Girls of Great Britain and Ireland Tiara. The monetary denomination, the coin's weight and fineness, and the 2014 year date are also shown.

The reverse of this unique coin features a sculpted representation of an abalone shell, with a polished fragment of abalone shell centrepiece, against a rippled pattern representing the ocean floor. The inscription AUSTRALIAN ABALONE SHELL and The Perth Mint’s ‘P’ mintmark also appear in the design.

The 2014 Australian Abalone Shell coin features a beautiful fragment of abalone shell, showcasing the spectacular inner surface of this highly sought after Australian mollusc.
The smooth inner shell is composed of nacre or mother-of-pearl which displays an iridescent mix of colours, ranging from deep cobalt blue and peacock green, to purples, creams and pinks. The vibrant inner layer of abalone shells are highly sought after as decorative pieces, and are use as a source of mother-of-pearl for jewellery, buttons, and inlays in furniture and musical instruments.

In addition to being adored for their stunning inner shells and pearls, the flesh of the abalone is considered to be a culinary delicacy in many countries, consumed raw or cooked in a variety of dishes.