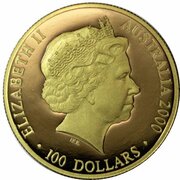 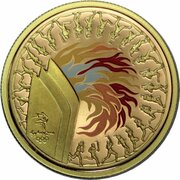 Depiction of a colourised flaming Olympic Torch with 25 miniature Torch Bearers running around the outside rim.
Sydney 2000 Logo and Olympic Rings bottom left

This coin represents Achievement and was issued in 2000 and was dated 2000.

Bullion value: 569.59 USD Search tips
This value is given for information purpose only. It is based on a price of gold at 57,016 USD/kg. Numista does not buy or sell coins or metal.