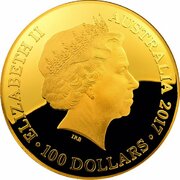 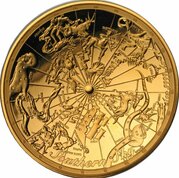 The mystical beauty of the night sky, the decadence of gold and the innovative craftsmanship of the Royal Australian Mint unite in this elegant dome-shaped coin.

Strictly limited to 750 pieces, many respected constellations seen in the Southern Hemisphere are captured in an ounce of gold. This coin is sure to appeal to those enamoured by the night sky or the eternal allure of gold.

Bullion value: 1 707.38 USD Search tips
This value is given for information purpose only. It is based on a price of gold at 60 232 USD/kg. Numista does not buy or sell coins or metal.