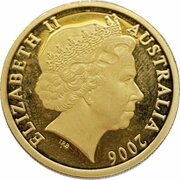 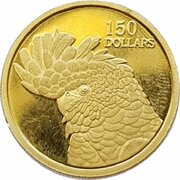 Close up of a Red Tailed Cockatoo

Released by the RAM as part of the Rare Australian Birds series, this was the third coin in the series.

Bullion value: 677.72 USD Search tips
This value is given for information purpose only. It is based on a price of gold at 65,433 USD/kg. Numista does not buy or sell coins or metal.