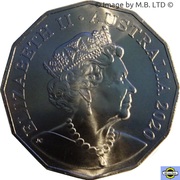 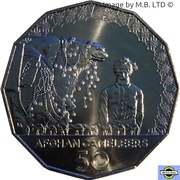 Afghan Cameleer standing next to a Camel, decorative border around top and right of the coin. Depiction of a Camel Train of eight Camels below.

The Royal Australian Mint has released a special 50 cent uncirculated coin to commemorate the work of Afghan Cameleers. The coin was issued in a coincard.

The Afghan cameleers who travelled to Australia from 1859 made a significant contribution to the exploration of Australia’s inland, and to the development of Australia as a multicultural nation.