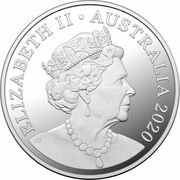 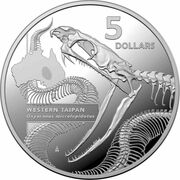 A Skeletal form of a Western Taipan depicted over a map of Australia with a shaded outline showing where they are found in Central Australia.

This Fine Silver (.999) Proof coin was issued by the RAM. It is part of a three-coin series: ‘Australia’s Most Dangerous’ featuring some of Australia’s deadliest animals reproduced in skeletal form.

A sinuous and elegant Western Taipan snake lunges at its prey – in skeletal form. The Western Taipan, Australia’s most venomous terrestrial snake, is feared and respected in equal measure. This is the third in a three-coin series that showcases Australia’s Most Deadly animals, in a unique and beautiful way.