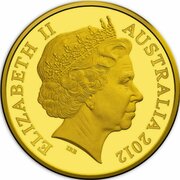 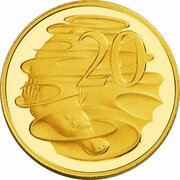 Platypus (Ornithorhynchus anatinus) and the numeral "20"

Part of an 8 coin miniature Gold Proof set issued by the RAM in 2012.

Bullion value: 31.71 USD Search tips
This value is given for information purpose only. It is based on a price of gold at 63,426 USD/kg. Numista does not buy or sell coins or metal.