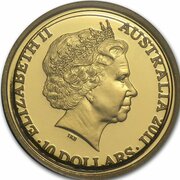 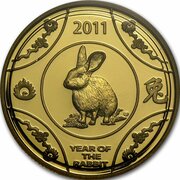 Rabbit with authentic Chinese Characters all in a symmetrical design,
Chinese symbol for Rabbit to the right.

Lettering:
011
兔
YEAR
OF
THE RABBIT

N 2007 the RAM launched an on-going series of Fine Gold (.999) NCLT Proof ten dollar coins depicting each Lunar year and their representative animals. The series ran until 2018. The "Year of the Rabbit" was the fifth coin in the series and was issued in a capsule in a wooden box.

Bullion value: 181.93 USD Search tips
This value is given for information purpose only. It is based on a price of gold at 58 550 USD/kg. Numista does not buy or sell coins or metal.