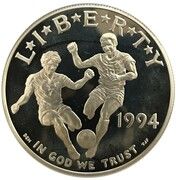 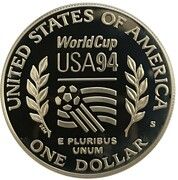 The 1994 World Cup Silver Dollar carried an extremely high maximum authorized mintage of 5 million coins. In recent prior years, commemorative dollar coins had much smaller maximum mintages. The coins were produced with a proof or uncirculated finish, with proof coins minted at San Francisco and uncirculated coins minted at Denver. The dollar coins were sold individually, as part of five different multi coin sets, and within a special edition set.

Bullion value: USD 15.72 Search tips
This value is given for information purpose only. It is based on a price of silver at 653 USD/kg. Numista does not buy or sell coins or metal.