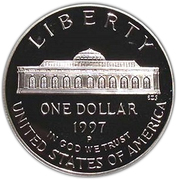 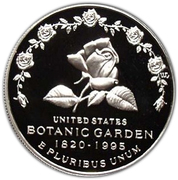 The 175th Anniversary of the Botanic Gardens

The facade of the National Botanic Garden in Washington, DC

Lettering:
LIBERTY
ONE DOLLAR
1997
P
IN GOD WE TRUST
UNITED STATES OF AMERICA

A single rose with a garland of roses encircling the rim

Translation:
United States
Botanic Garden
1820-1995
Out of Many, One

The 1997 Botanic Gardens Silver Dollar was issued for the National Botanic Garden in Washington, DC. Based on the inscriptions the occasion was for the 165th anniversary, which took place two years prior in 1995.

Collectors took focus on the 1997 Botanic Gardens Coinage and Currency Set, which included a matte finish 1997-P Jefferson Nickel. Because only 25,000 of the sets were sold, this nickel enjoys a level of scarcity that has supported high prices. The commemorative offering had a maximum authorized mintage of 50,000 coins across all options. Final combined sales fell below the half-way mark.

A member of this site wants to exchange it: AjaxPA