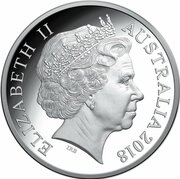 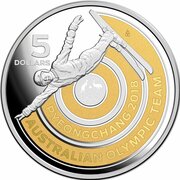 Australian Olympic Team logo in the centre, surrounded by concentric gold rings with a depiction of an Olympic Ski Jumper in full flight.

Issued by the RAM in 2018 to commemorate the participation in the Pyeongchang Winter Olympics by the Australian Olympic Team is this fine Silver (.999) Gilded Proof $5 coin. It was issued in capsule in a plush case. 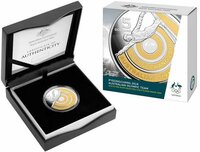