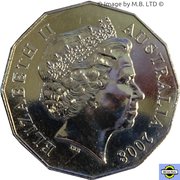 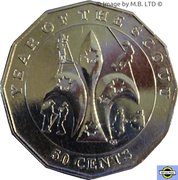 Lettering:
YEAR OF THE SCOUT
50 CENTS

The Royal Australian Mint released this NCLT 50 cent coin that commemorates 100 years of the Scouting movement in a credit card sized coincard.

A $1 coin celebrating the same thing was released into circulation.

The 50 cent coin was also released by Australia Post in a PNC.

A member of this site wants to exchange it: spike1