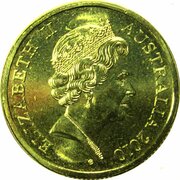 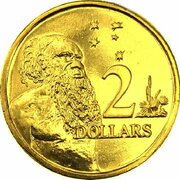 This coin was part of a unique Fine Gold (.999) Proof set released by the RAM in 2010. The Reverse of the coin in the set used the standard Stuart Devlin & Horst Hanne designs, but the Obverse used the Vladimir Gottwald 5th Portrait of Queen Elizabeth II, which had only been used previously on the 2000 Royal Visit Commemorative circulation 50 cent coin. Only 450 sets were made and a full set commands a very hefty pricetag as at 2020.

Bullion value: 808.43 USD Search tips
This value is given for information purpose only. It is based on a price of gold at 56,658 USD/kg. Numista does not buy or sell coins or metal.