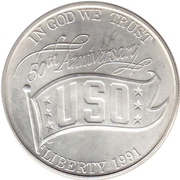 A pennant based on the design of the USO flag. Written above in calligraphy is “50th Anniversary”.

Eagle with USO pennant in its beak, perched atop the globe to symbolize worldwide service of the USO. There are eleven stars in a semi-circle below the globe

A maximum mintage of one million coins was established for the 1991 USO Silver Dollar. Proof versions were struck at the San Francisco Mint, while uncirculated versions were struck at the Denver Mint. The coins were officially launched on June 8, 1991 during a victory parade for troops returning from operation Desert Storm. The cost of each coin included a surcharge, half went to the USO to fund its programs and the other half was used to reduce the national debt.

Bullion value: USD 17.33 Search tips
This value is given for information purpose only. It is based on a price of silver at 720 USD/kg. Numista does not buy or sell coins or metal.