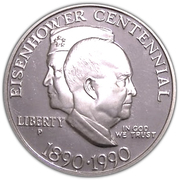 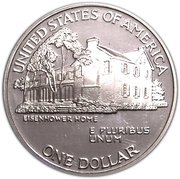 The Eisenhower Silver Dollar was offered in proof and uncirculated versions with a maximum authorized mintage of 4 million coins. The uncirculated version of the coin was produced at the West Point Mint and the proof version at the Philadelphia Mint. Sales for the program were initially strong, with more than one million ordered within less than three months. After that point, the pace of sales slowed with the final number reaching 1.39 million by the conclusion of sales.

The coins were offered for sale individually, with the proof version also included in the 1990 Prestige Proof Set. Surcharges from the sale of the coins was used to reduce the public debt.

Bullion value: USD 17.33 Search tips
This value is given for information purpose only. It is based on a price of silver at 720 USD/kg. Numista does not buy or sell coins or metal.