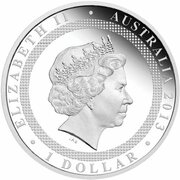 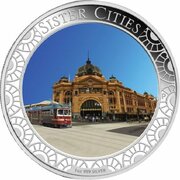 To celebrate the unique Sister City relationship between Melbourne in Australia and St Petersburg in Russia, The Perth Mint has released a limited edition coin portraying an iconic landmark located in each stunning metropolis. The coin is Proof Quality 99.9% Pure Silver and is meticulously struck from 1oz of 99.9% pure silver in superb proof quality. This coin was a special ANDA only release.

The coin’s reverse features an  Innovative Lenticular Reverse coloured image of an iconic landmark in each of the Sister Cities. The front façade of Flinders Street Station in Melbourne is depicted with a passing tram. The Admiralty building of St Petersburg, which faces the Neva River, is also shown with Isaac Cathedral in the background.

With the use of lenticular lenses, these images transform from one to the other as the coin is moved. The design is headed by the inscription SISTER CITIES and surrounded by decorative bands inspired by the architecture of each landmark. The Perth Mint’s traditional ‘P’ mintmark is also incorporated into the design. 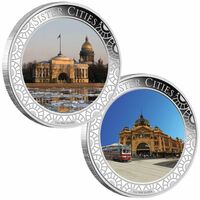 Bullion value: 26.17 USD Search tips
This value is given for information purpose only. It is based on a price of silver at 841 USD/kg. Numista does not buy or sell coins or metal.