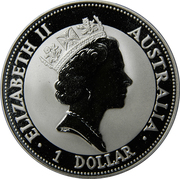 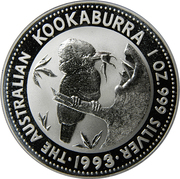 Depicts a mother kookaburra returning to her nest with a lizard to feed her
hungry chicks.

A member of this site wants to exchange it: JoachimSdl

Bullion value: 27.86 USD Search tips
This value is given for information purpose only. It is based on a price of silver at 883 USD/kg. Numista does not buy or sell coins or metal.