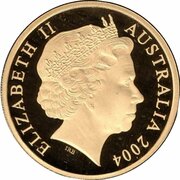 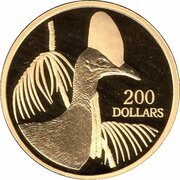 Head and shoulder depiction of a Cassowary Bird facing right.

Released by the RAM as part of the Rare Australian Birds series, this was the first coin in the series.

A coin with the same design but with a face value of $150 and different weight and diameter was released in UNC finish.

Bullion value: 962.00 USD Search tips
This value is given for information purpose only. It is based on a price of gold at 63,520 USD/kg. Numista does not buy or sell coins or metal.