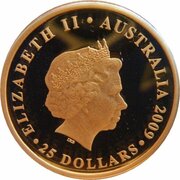 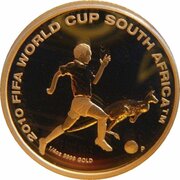 Soccer player and Kangaroo in background

The Perth mint released three coins to celebrate Australia's participation in the FIFA World Cup of Football held in South Africa in 2010. This is the Fine Gold Proof $25 Coin.

Bullion value: 425.28 USD Search tips
This value is given for information purpose only. It is based on a price of gold at 54,690 USD/kg. Numista does not buy or sell coins or metal.