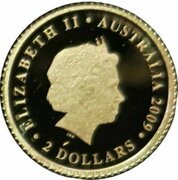 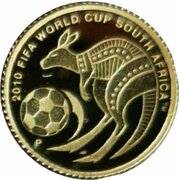 The Perth mint released three coins to celebrate Australia's participation in the FIFA World Cup of Football held in South Africa in 2010. This is the Gold Proof $2 Coin.

Bullion value: 27.32 USD Search tips
This value is given for information purpose only. It is based on a price of gold at 54,690 USD/kg. Numista does not buy or sell coins or metal.