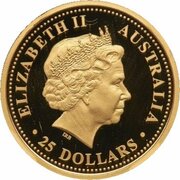 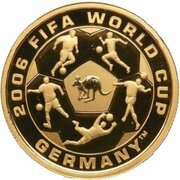 Five Football players arranged on the panels depicting a Soccer Ball. The centre panel has a Kangaroo

Released by the Perth Mint to celebrate the 2006 FIFA World Cup of Football hosted by Germany in 2006. 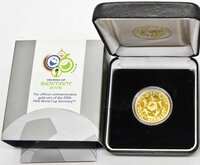 Bullion value: 446.98 USD Search tips
This value is given for information purpose only. It is based on a price of gold at 57,510 USD/kg. Numista does not buy or sell coins or metal.