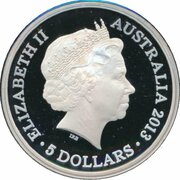 Centenary of Canberra - Capital of Australia

Lettering:
1913 - 2013
CENTENARY OF CANBERRA (Repeated below in mirror image)
AS

This coin was released in 2013 by the Royal Australian Mint. It celebrates the 100th Anniversary of the founding of the City of Canberra, the Capital City of Australia. It was issued in a capsule with certificate in a plush box. 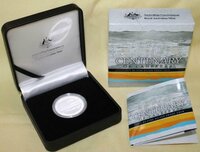 Bullion value: 31.92 USD Search tips
This value is given for information purpose only. It is based on a price of silver at 880 USD/kg. Numista does not buy or sell coins or metal.