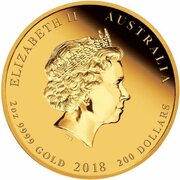 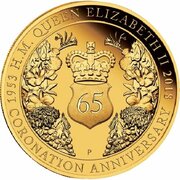 To celebrate 65 years since the coronation of Her Majesty Queen Elizabeth II, The Perth Mint proudly presents this splendid coin featuring symbols of the British monarchy alongside representations of the floral emblem of Australia, the golden wattle, as well as the official flower of each Australian state and territory. The coin honours the deeply respected Queen’s record as the longest reigning monarch in British history.

Bullion value: 3 746.85 USD Search tips
This value is given for information purpose only. It is based on a price of gold at 60 232 USD/kg. Numista does not buy or sell coins or metal.