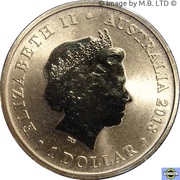 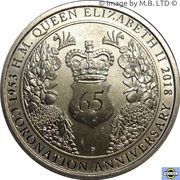 Struck by the Perth Mint but issued exclusively by Australia Post in PNC Issue 14 of 2018 (7,500 Copies)

The coin celebrates 65 years since the coronation of Her Majesty Queen Elizabeth II, the coin features symbols of the British monarchy alongside representations of the floral emblem of Australia, the golden wattle, as well as the official flower of each Australian state and territory. The coin honours the deeply respected Queen’s record as the longest reigning monarch in British history.