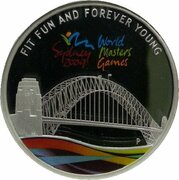 This Fine Silver (.999) Colourised coin was released in a plush case and box by the Perth Mint to celebrate the World Masters Games held in Sydney in October 2009.

An Aluminium-bronze coin was also released in a coincard. See link.

Bullion value: 28.36 USD Search tips
This value is given for information purpose only. It is based on a price of silver at 912 USD/kg. Numista does not buy or sell coins or metal.