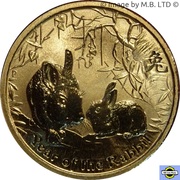 Two Rabbits surrounded by vegetation, chinese character for Rabbit to the right.

Lettering:
P
Year of the Rabbit