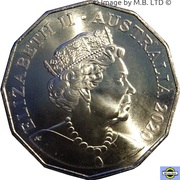 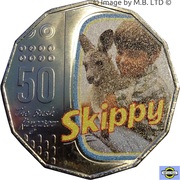 Colourised image of Skippy and Sonny Hammond to the right.
Buttons with numbers to the left.

This NCLT 50 cent coin was released by the Royal Australian Mint on 4/5/2020 to commemorate 50 years since the popular children's TV Show "Skippy the Bush Kangaroo" was aired on TV sets around the world. It was released in a coincard with mintage of only 20,000. 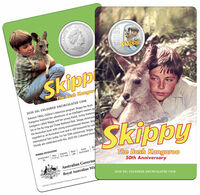 This is a clip from the opening & closing credits of the show.   https://www.youtube.com/watch?v=hByob-5pPEs

Australia Post has released a PNC with this coin (2020 Issue 9).