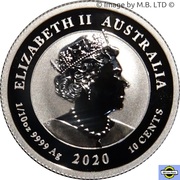 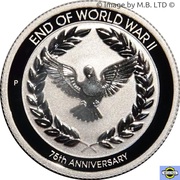 75th Anniversary of the end of WW2

A Dove of Peace flying between two Olive Wreathes

Released by the Perth Mint is this End of WWII 75th Anniversary 2020 1/10 oz Silver Coin in a coincard.

Responsible for the death of an estimated 60 to 80 million soldiers and civilians, WWII was an international struggle that ended in 1945 following years of devastating battle. In 2020, 75 years on, the world stands ready to reflect upon the events of the war and acknowledge the enormity of the sacrifice and suffering it caused.

Bullion value: 2.58 USD Search tips
This value is given for information purpose only. It is based on a price of silver at 831 USD/kg. Numista does not buy or sell coins or metal.