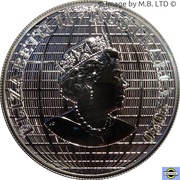 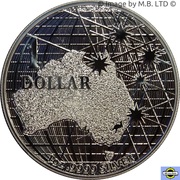 Beneath The Southern Skies

Map of Australia with stars of the Southern Cross to the right set on a gridlike globe background. A small Kangaroo is placed where the nations capital Canberra is located.

This Fine Silver Coin was released by the RAM in a capsule, named Beneath the Southern Skies it is part of a stunning gold and silver investment coin series. It pays homage to Stuart Devlin, whose artwork appears on most Australian circulating coins.

One of Devlin’s early drafts was the inspiration for this new series. The design acknowledges the significance of the Southern Cross constellation, which is one of the most meaningful and recognisable features in the southern skies.  The coin is minted to .9999 purity and manufactured to the Royal Australian Mint’s brilliant uncirculated finish.

A member of this site wants to exchange it: Henksmunten

Bullion value: 25.84 USD Search tips
This value is given for information purpose only. It is based on a price of silver at 830 USD/kg. Numista does not buy or sell coins or metal.