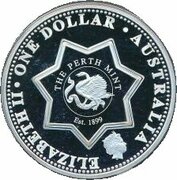 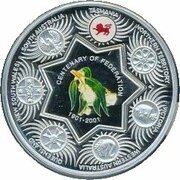 Outer Ring has the Badges of the Six States and Northern Territory with Tasmania in colour. Inner Dump has a coloured representation of the Floral Emblem of Tasmania the Tasmanian Blue Gum.

This interlocking coin and medal pair was issued at the ANDA Coin show in Perth as part of a six coin/medal Holey Dollar State Tribute series. Unlike the standard non-coloured release, the 7-pointed star-shaped centrepiece (or dump) is a medallic issue - it was not given a legal tender value. The reverse design of the dump depicts a full-colour image of Tasmania's floral emblem - the Tasmanian Blue Gum. 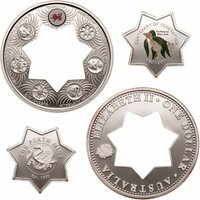