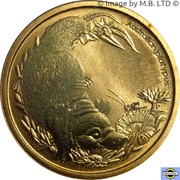 A young Platypus swimming through vegetation. A Grasshopper watches on.

Struck by the Perth Mint but issued exclusively by Australia Post in a PNC. (2013 Issue 11)