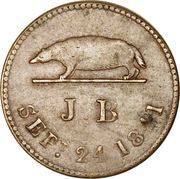 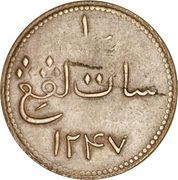 James Brooke ordered a quantity of kepings from a small private mint in Birmingham with help from a trading company based in London and Birmingham, Messrs Smith & Wright. The coin reverse was struck from an old worn out die bearing the denomination "satu keping" (one keping) in Arabic and the date 1247A.H (1831) which had been used earlier for the striking of the Singapore Merchant Token.

They were struck in copper or brass, the later being the scarcer variety, although both versions are rare. Counterfeit of the Sarawak 1831 keping came on to the market in 1971 and have since caused many a headache to collectors.

Many people believe that the token is to commemorate the day James Brooke received the land and title "Rajah of Sarawak" from Pengiran Muda Hashim.