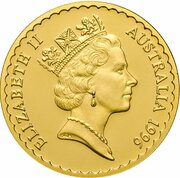 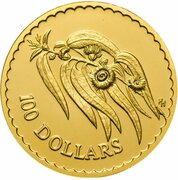 Depiction of a Tasmanian Blue Gum sprig with flowers and seed pods.

This is the second coin in the Ram's Fine Gold Floral Emblem series, a Tasmanian Blue Gum representing Tasmania. Released in Uncirculated and Proof versions.

Bullion value: 657.07 USD Search tips
This value is given for information purpose only. It is based on a price of gold at 63,426 USD/kg. Numista does not buy or sell coins or metal.