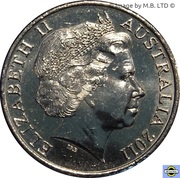 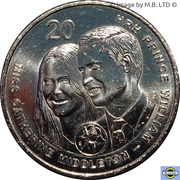 This coin was released into circulation by the Royal Australian Mint in 2011 to celebrate the marriage of Prince William and Catherine Middleton on 29th April 2011.

A 50 cent coin with the same design was released in a coincard and PNC.