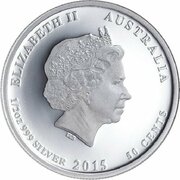 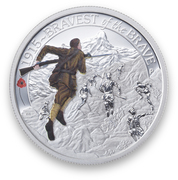 Bravest of the Brave

Depiction of Anzac soldiers as they battled to scale the cliffs above Anzac Cove. The design includes one soldier in colour in the foreground, the inscription ‘1915 – Bravest of the Brave’, a red poppy, and The Perth Mint’s traditional ‘P’ mintmark.