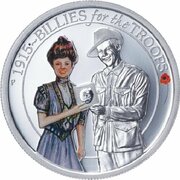 A symbolic image of a woman in colour giving a billy tin to a First World War Australian soldier. The image on the tin is the Alexandra Club Christmas billy tin design which features a kangaroo on the Gallipoli peninsula. The design includes the inscription ‘1915 – Billies for the Troops’, a red poppy, and The Perth Mint’s traditional ‘P’ mintmark.

Bullion value: 13.27 USD Search tips
This value is given for information purpose only. It is based on a price of silver at 852 USD/kg. Numista does not buy or sell coins or metal.