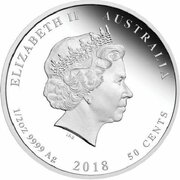 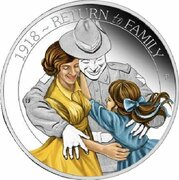 Return to the Family

The Return to Family coin depicts the warm embrace shared by an Australian returned serviceman and his family as he is welcomed home, along with a red poppy.

Bullion value: 12.93 USD Search tips
This value is given for information purpose only. It is based on a price of silver at 830 USD/kg. Numista does not buy or sell coins or metal.