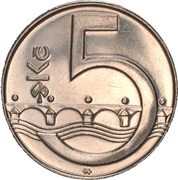 Czech Lion, state name 'ČESKÁ REPUBLIKA', and year of issue and mintmark below

Depiction of Charles Bridges which crosses Vltava river in Prague, A Linden leaf, and denomination in a large font 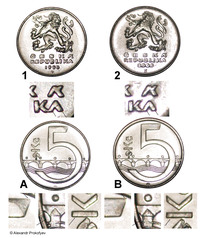 Notes.
1. Two varieties of  Obverse are known in 1995. They differ by mintmark and style of date:

© Image courtesy of Numismatika Oliver
Both varieties have the same Reverse die A.

2. 2007 Issue is claimed by Czech National Bank (ČNB) as a purely set issue, however, these coins are found in general circulation, but  they are difficult to find.

» Buy coins from the Czech Republic