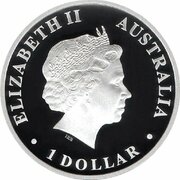 A Whale Shark swimming above a reef, in front of a coloured background.