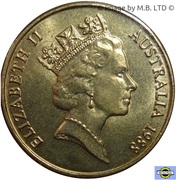 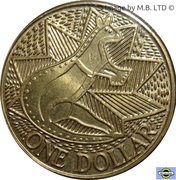 Issued by the RAM into circulation to commemorate the Bi-Centenary of the First Fleet.  This was 200 years since Captain Arthur Phillip, the commander of the First Fleet, planted the British Flag at Sydney Cove which signified the beginning of European settlement.

This one dollar coin reminds Australians of the original Aboriginal inhabitants of our nation. The reverse depicts aboriginal artwork- a stylised kangaroo on a backdrop of a seven pointed (Federation) star. When one of these is received in change, it is a reminder of the native Koori people that were displaced by European settlement.
The coin was also issued in the annual proof and uncirculated sets. 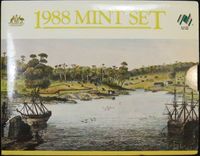 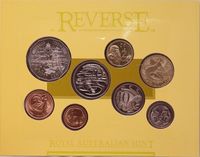 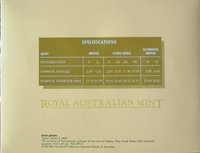 Two Silver (.925) versions of the coin with different dates were also released in capsules in the Masterpieces in Silver presentation sets in 1988 & 1990.

This 1988 issued coin was also re-issued in a special Restrike Five Coin UNC set in 1992 to celebrate the first five different one dollar designs issued between 1984 and 1992.