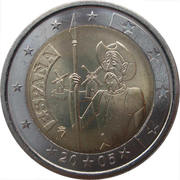 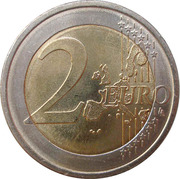 An image of Don Quixote holding a lance, with windmills in the background in centre, the country name to the left above the mintmark. The 12 stars of the European Union are shown in the outer ring of the coin, with four of them impressed into the surface, and the date at the bottom.

The Ingenious Gentleman Don Quixote of La Mancha (Modern Spanish: El ingenioso hidalgo Don Quijote de la Mancha), or just Don Quixote, is a Spanish novel by Miguel de Cervantes. It was published in two parts, in 1605 and 1615. A founding work of Western literature, it is often labeled "the first modern novel" and many authors consider it to be the best literary work ever written.