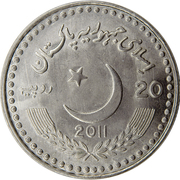 "Islamic Republic of Pakistan" written above a waxing crescent and star with the denomination in numerals (20) on the right and "Rupee" written in Urdu on the left, with the date underneath (2011) above two sprigs of wheat with the arms curved upwards. This is all surrounded with a circle of 60 small beads along the edge.

"2011 YEAR OF PAK CHINA FRIENDSHIP" written above "60th" and two hands shaking, one with the 5 stars representing China and one with the crescent and star representing Pakistan, with 1951-2011 written below, with all this surrounded by a circle of 60 small beads.