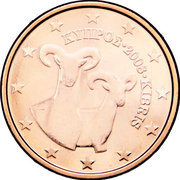 Mouflon, a species of wild sheep found on Cyprus and representative of the island’s wildlife.

The reverse of the coin shows Europe in relation to Africa and Asia on a globe; it also features the numeral 5 and the inscription EURO CENT.