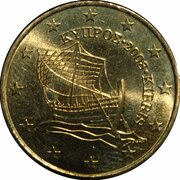 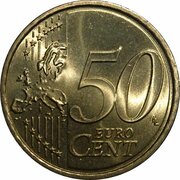 Kyrenia ship, a trading vessel which dates back to the fourth century BC and a symbol of Cyprus’s seafaring history and its importance as a centre of trade.

The reverse of the coin shows a geographical image of Europe; it also features the numeral 50 and the inscription EURO CENT.