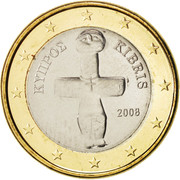 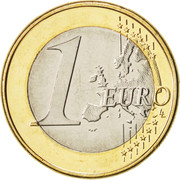 A cross-shaped idol dating back to the chalcolithic period (3.000 B.C.), found in Pomos, a village in the district of Paphos. It is a characteristic example of prehistoric art in Cyprus, reflecting the island's antiquity and civilization.

The reverse of the coin shows either the European Union before its enlargement on 1 May 2004, or, as of 1 January 2007, a geographical image of Europe; it also features the numeral 1 and the inscription EURO.