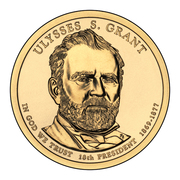 The bust of Ulysses S. Grant facing the viewer