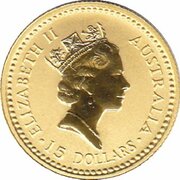 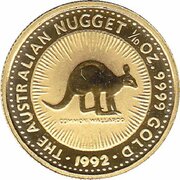 One crouching Wallaroo set in an inner circle, text around & date below

Released by the Perth Mint in 1991 as Proof and followed up in 1992 as an UNC coin is this Nugget/Kangaroo coin.

Bullion value: 177.14 USD Search tips
This value is given for information purpose only. It is based on a price of gold at 57,016 USD/kg. Numista does not buy or sell coins or metal.